Rick suggests that learning how to grow, prepare and eat food are skills that require physical labour. Create a group activity of either growing, preparing or eating that reminds you of both the labour and the pleasure and community-building in this work.

Discuss the different elements in the Haudenosaunee Creation Story – the skydome and earth dome, the duality of the twins born of Skywoman’s daughter, the relationship between human and plants. Research other creation stories for the similarities and differences in these elements.

In what ways does the cradleboard that Rick made for his daughters represent what was lost with colonization and what is being recovered now? How does it represent an intergenerational process of Indigenous resurgence?

At the core of the Haudenosaunee worldview is the acknowledgement of and an expression of gratitude to all beings that sustain life. What are the ways that you, your family or community recognize and thank the elements that we depend upon? See Thanksgiving Address video.

There is a growing practice of offering land acknowledgements at schools, cultural and political events. The Dish with One Spoon Treaty is often recognized in the region around Toronto, Ontario. What treaties govern the areas that you live in? How can they be recognized?

Tim Leduc is author of the book A Canadian Climate of Mind: Passages from Fur to Energy and Beyond (MQUP, 2016) that looks at the colonial roots of today’s climate change-energy issues. He is faculty in land-based Social Work at Wilfrid Laurier University, and has also published Climate, Culture, Change: Inuit and Western Dialogues with a Warming North.

“Renewing Settler Responsibilities on the Dish”

The Earth is alive, we are part of this Earth, and our human responsibilities arise from nurturing our deep roots in this life source. These are the central messages that stir in my heart and mind as I listen to Rick Hill talk about the Dish-with-One-Spoon as an “earthen jar” that, in his Haudenosaunee stories, is the body of our Mother. It is from Her being that the sustenance of the Medicinal Plants, Three Sisters, Beaver, and so much more arises, and with them our human responsibility to embody what he refers to as our Original Instructions. These call us to express Thanksgiving for all that makes life good on this Dish – from the sustenance of the land, waters and sky to the celestial and spirit beings that energize life in this great mystery of the Creator.
When I hear this teaching, I feel my settler ancestry being called to deepen my learning by finding a cultural way into what is being asked of us today as a climate of change swirls around us. Following the matrilineal protocols of these lands, I root myself in the French Canadien being of my mother and our ancestral relations to the 1701 Montreal Tree of Peace that was suffused in wampum belts teachings, including the Dish-with-one-Spoon. I can almost hear the French governor Callière lifting up our responsibilities as he talks about how this “big dish” represents all the common lands we will share through “a misouaine [spoon] to eat the meat and drink the broth all together.” A misouaine, rather than a knife, represents our intention to be careful with all our relations so as to share all that is given by lands that are beyond human ownership.

Some surely sensed the sharp words of disrespect carried by French officials like the Jesuit missionaries who were translators for the hopeful tree planting. As Father Charlevoix wrote: “This ceremony, as serious as it was for the Savages, was for the French a kind of comedy, which they enjoyed very much.” The Jesuits saw the “wild” nature around Montreal as outside divine grace, and Indigenous peoples as sauvages who were similarly uncultivated. With this view and the Doctrine of Discovery that gave Europeans the right to control “discovered” lands, an unravelling of our shared responsibilities was enacted through religious missions that converted peoples away from an “evil” world; and economic missions that appropriated our Mother’s abundance into the unsustainable wealth of colonial nations and corporations. The intersectional intensity of this violence is today represented in the coinciding calls for change by survivors of Residential Schools, families of Murdered and Missing Indigenous Women and Girls, and the climatic turbulence of our Mother.

Agreeing to care for the Dish goes far beyond the dominant political, economic and cultural sense of treaties in the settler mind. It is, at root, a spiritual contract between human nations, the beings of creation, and the land’s spirit. In trying to reconnect with it, I am, we are, agreeing to find ways of embodying an expression of gratitude for all our relations. Contrasting the colonial assumptions of unending economic growth and geographically fixed borders, the Dish reminds us that multiple nations can co-exist on common lands in ways that are culturally and ecologically unique, yet mutually beneficial. But to do so, settlers need to do the hard work of relearning how to embody those original life-affirming values of sharing, respect and peace from Indigenous teachings like those of Rick Hill. It is in fostering these roots that we may renew ways for sustaining the diversity of life on our Mother.

Deyohaha:ge and Six Nations Polytechnic video series with Thru the Red Door

The Earth to Tables Legacies collaborator Rick Hill has created three videos of his power point presentations introduce us to the history, philosophy and food legacies of the Haudenosaunee, also known as the Iroquois Confederacy (French) or (in English) the Six Nations (Mohawk, Oneida, Onondaga, Cayuga, Seneca, and Tuscarora). Watch the second video here:

Through beautiful paintings, wampum belts, wooden and ceramic vessels, cradleboards and clothing, we learn more about the creation story, the original instructions, the Thanksgiving Address of greetings and thanks for all living things, and the ceremonies that honour these relationships.

The Great Dish with One Spoon Treaty offers a poignant lesson for all of us facing a global environmental crisis:

With climate change, our ceremonies have to be strong enough to help us survive this change. Rather than look at the earth as a commodity, we have to realize the Earth is alive; she has expectations of us, and we have a responsibility to her. 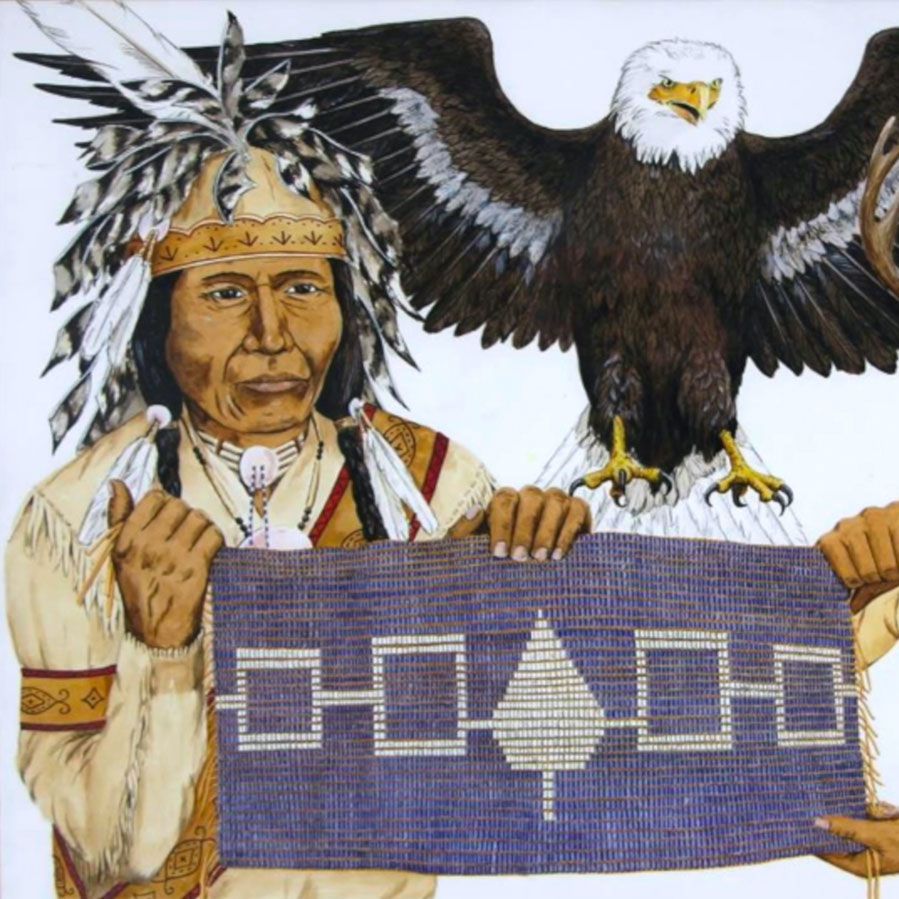 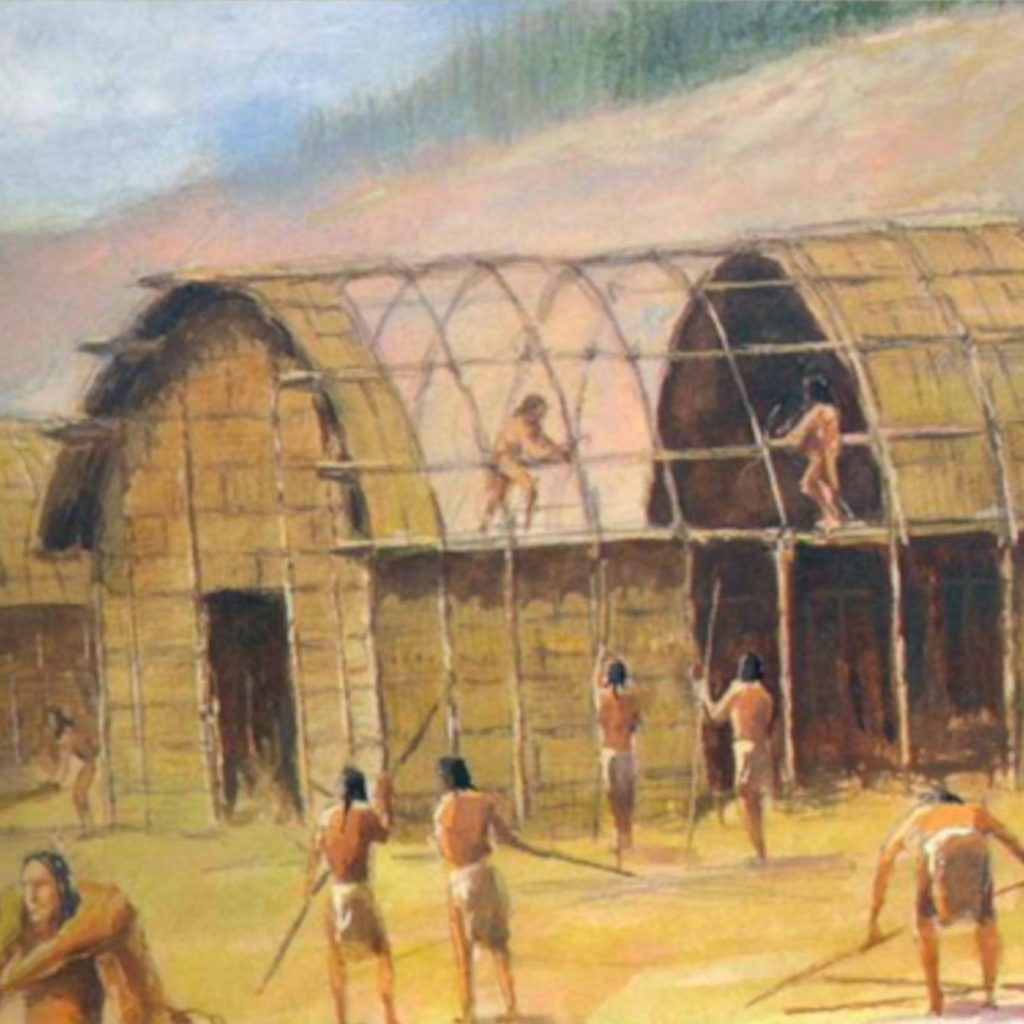 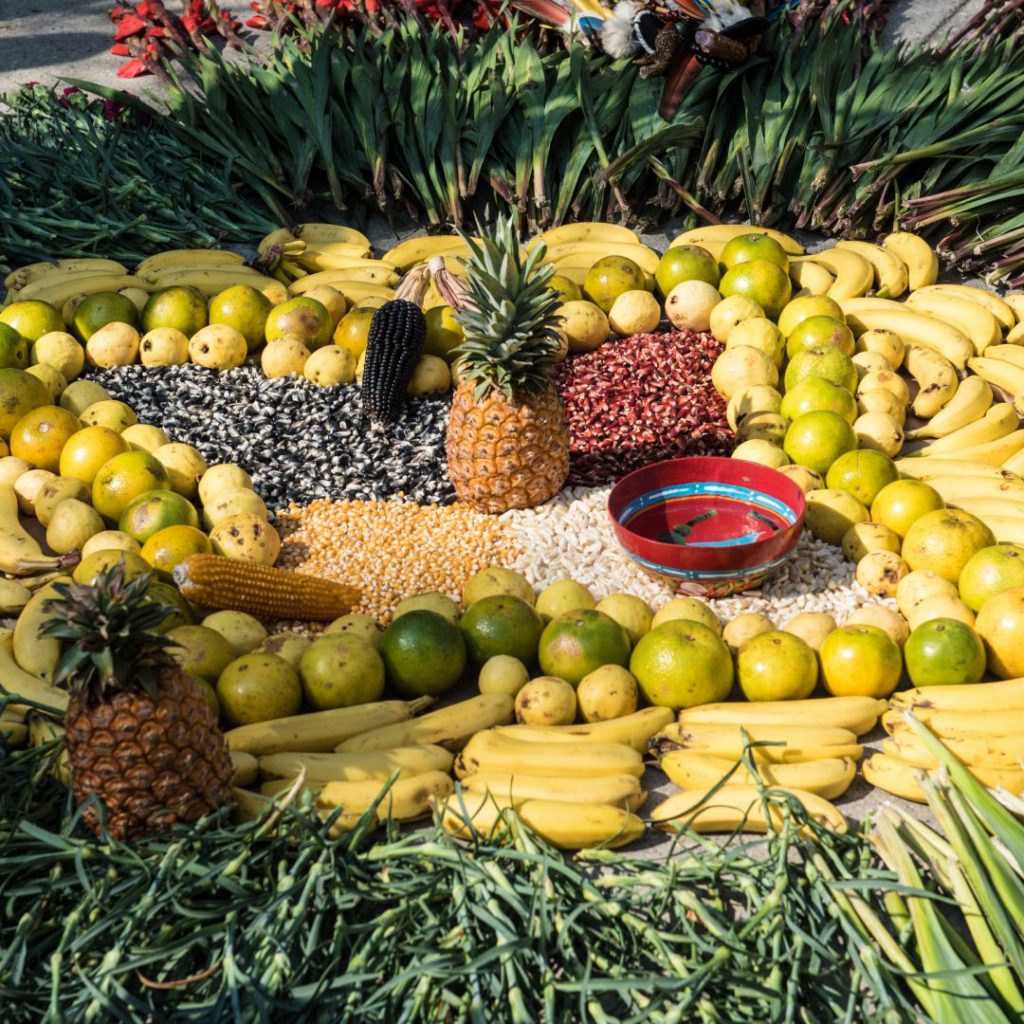